Alfa Beer (Alfa Bier) is a Dutch producer of ale, pils and other beer brews. Their packaging is the creative work of Brand Junkies branding agency.

The defining credo behind the packaging’s entire concept is that “strong beer needs strong packaging.” This notion has determined the direction of the packaging that uses a very distinctive housing, quite different from anything a consumer may encounter on a retail store shelf.

To signify the strength of the beer, the casing looks like real concrete. A consumer needs to rip the seams in the middle to reach the beer bottle inside. But not so soon, as the bottle is still “put behind the bars.” The user must bend and break into the “prison cell” to finally get their hands on the bottle. Brand Junkies prides itself in this one-of-a-kind unboxing experience.

The beer bottle itself has a very exclusive look, reminiscent of expensive wines and champagnes. Even the way to open the cork with steel wiring resembles the experience of opening a bottle of champagne.

The other half of the packaging houses two Alfa branded beer glasses. True to its branding, both the bottle and the glasses are contained inside a frame with uneven borders that resemble a hole in the wall.

Get free proposals from the best creative agencies!
SHARE YOUR PROJECT 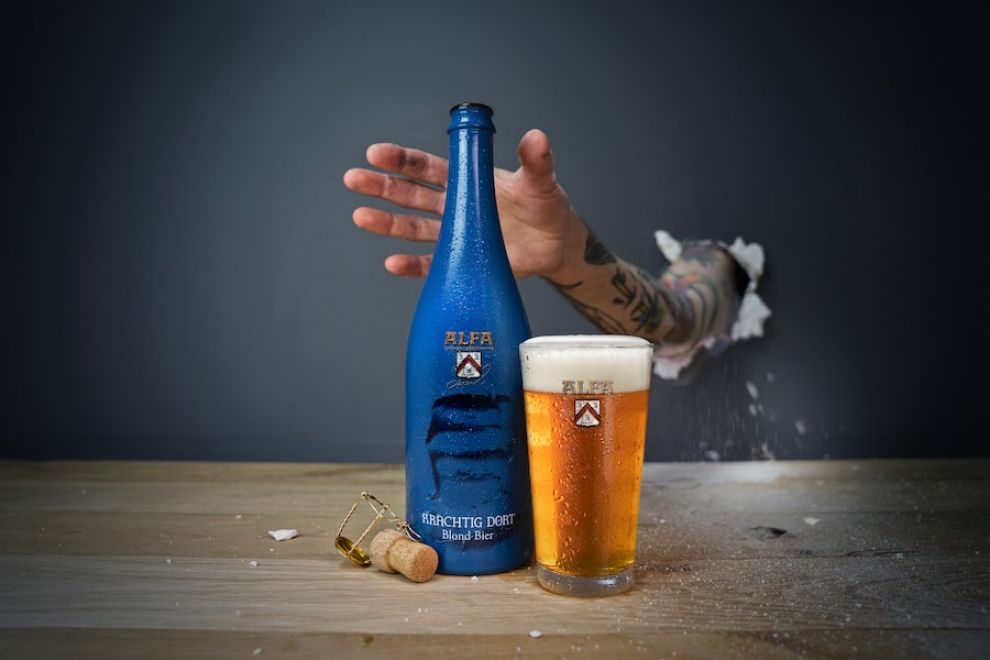 In its original and unopened form, the Alfa Beer package design’s “concrete” block (made out of sturdy cardboard) looks like your real-life slab of cement: a chunky, grey crate that even has little holes and cracks added for that extra realistic effect.

The “Krachtig Dort Blond Bier” lettering that signifies the type of beer inside is located in the bottom left corner (as well as the sides of the box). The fonts are also given a faded-out treatment to make them appear worn out by the passage of time.

Down the box’s middle is a peel-away “zipper” in the shape of a metal rod (like the ones a consumer will find inside, “detaining” the bottle). “Unzipping” will split the box into two halves, opening it and revealing its contents.

The box’s interior is the most inventive and fun part. The left half of the packaging contains the vibrant blue bottle behind metal “prison” bars. The right half houses two beer glasses. As mentioned earlier, the consumer has to bend and remove the rods in order to get hold of the bottle. 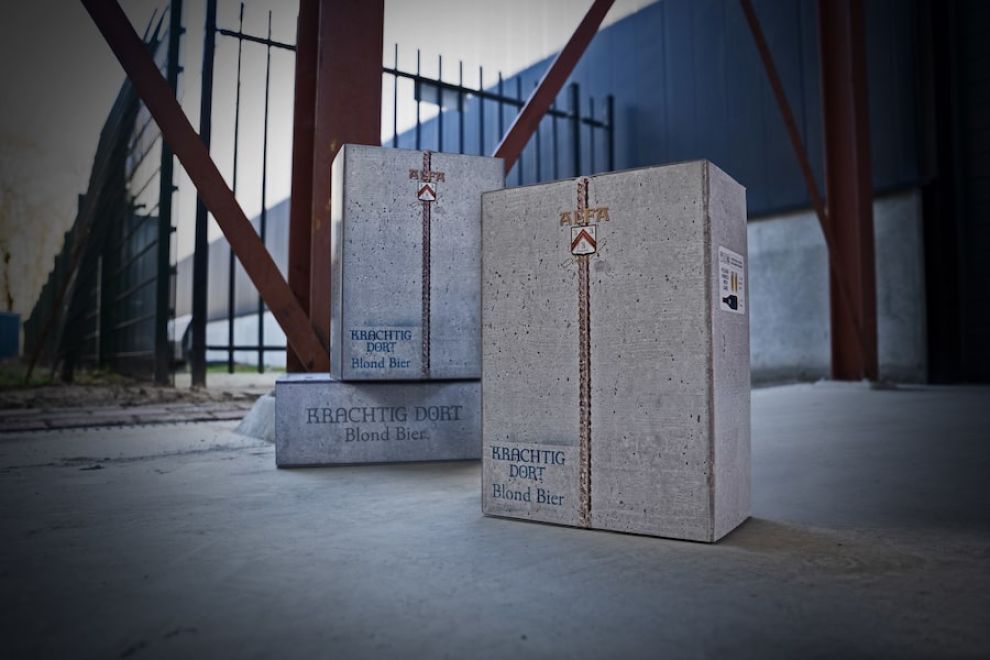 Once the consumer reaches the bottle, they can admire it for its own splendor, separate from the actual housing. Sporting an interesting vivid hue of blue, the bottle is non-transparent and has an air of exclusivity to it.

The bottle owes its premium feel to the way it is cracked open: unlike most beers, this one has a cork plug and thin, metal wiring as used on champagne bottles. To remove the plug, the consumer must first untangle the wires.

Even the shape of the bottle, with its bottom half slightly wider, is more akin to the industry of luxury wines rather than beers.

The typography used in the “concrete” housing of the Alfa Beer package is a custom-made serif font that the brand uses on all of its products.

The “zipper” that opens the package has Alfa’s recognizable insignia: the brand name and the brewery’s crest.

The same elements – in the same font – are also found on the bottle. The “Alfa” is even slightly embossed for a classy 3D effect and its golden letterings stand out really well against the bottle’s royal blue.

The beer name is at the bottom, in white fonts. And instead of a traditional beer label, they opted for an abstract black pattern, immersed into the color of the bottle. 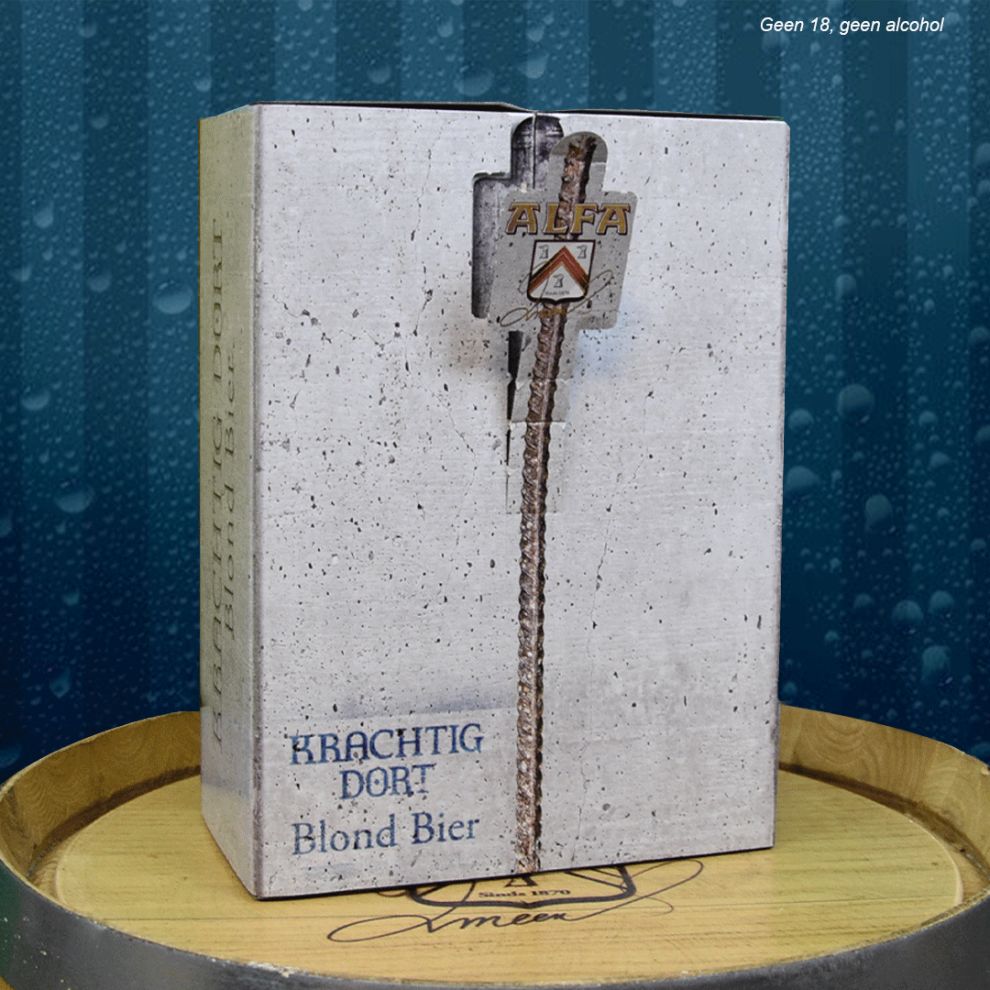 Although deluxe, limited-edition boxes are not unfamiliar to F&B brands, they provide a great opportunity for innovation and thinking outside the box. Without market restraints that other mass-produced goods impose, creative designers can let their imagination run amok.

Reflecting the strength of a beer with a block of cement is a fun way to draw the consumers’ attention and get noticed in the multitude of similar products.

The distinctiveness and cleverness of Alfa Beer packaging are the main reasons why it claimed DesignRush’s Best Package Design Award.